How One Tiny Fish Can Help You Defy Aging

How One Tiny Fish Can Help You Defy Aging

In the 1968 sci-fi movie, 2001: A Space Odyssey, the crew members are put in a state of suspended animation, lying inside a pod to preserve oxygen and life support supplies.

But using suspended animation to defy aging is not just science fiction.

Scientists now know that putting living cells and organs into a state of hibernation can effectively slow down biological aging and allow for a much longer lifespan.

New research reveals there might be a way to achieve a state of “physical hibernation” while still performing our normal daily activities—no space age pod necessary!

How? They’re turning to the secrets of a very unique, age-defying fish called the killifish.

The African turquoise killifish is tiny, about the size of your thumb, yet it has a curious ability that’s stunning anti-aging researchers. 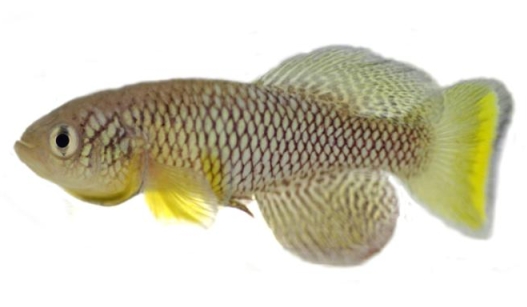 This fish can essentially press the “pause button” on its development and live in a state of suspended animation for five times its usual lifespan!

Killifish only live for about four to six months and when females have babies, the embryo grows outside of the mother’s body. While in embryonic form, the killifish develops the beginnings of a full organ system before pressing the pause button on future development.

You see, these fish live in freshwater, so they rely on the rainy season to survive. When the rains end and rivers, ponds and lakes dry out, the embryos are left high and dry. With no water, they put their development on hold as a survival tactic until the drought ends.

Researchers call this state of suspended animation diapause, and it can last for up to two-and-a-half years in killifish. In human terms, that would mean staying inside our mother’s womb for 400 years before living out our lifespan of 80 years.

A Muscle Gene Could Prove Crucial to Diapause

Recently, a team of anti-aging researchers from Stanford began investigating how diapause works. They began their research with the belief that killifish must experience an evolutionary tradeoff for this unique ability.

In other words, by preserving their embryonic state they would be expected to suffer in other ways. In nature you usually have to give up something to get something. But it turns out these fish don’t. The killifish in these experiments suffered no detrimental health effects from diapause. In fact, rates of growth, fertility, and aging remained the same as those found in the killifish that didn’t undergo diapause.

Researchers examined killifish genes involved with cell proliferation and organ growth as well as those involved with muscle maintenance and metabolism. In particular, they pinpointed a gene called CBX7.

They called this gene “the master regulator” of muscle maintenance during diapause. In killifish models that lacked the gene, the muscles withered, and the embryos came out of diapause early. If this happened in the wild they wouldn’t be able to survive.

The Stanford scientists came to the conclusion that CBX7 allowed the embryo to pick up development where it left off and continue growing normally after diapause.

The researchers believe it may be possible to apply this mechanism to people and thereby slow or stop the aging process.

Slowing the Aging Process Over the Long Term

Scientists have studied diapause in other species, including insects and the roundworm c. elegans, which is commonly used in aging research. The research revealed that diapause does in fact delay aging in these species, yet the killifish discovery of diapause might be the most promising of all.

The scientists hope their findings in killifish could reveal effective ways to preserve cells for extended periods of time, such as stem cells–which are critical to health and longevity, and lead to new strategies to combat aging and age-related diseases.

Senior author of the study and professor of genetics, Dr. Anne Brunet hypothesized, “Turning on a ‘diapause-like’ state – or tapping into the molecular machinery of diapause – in some adult tissues or cells could help preserve them long-term.

“We think it’s interesting from a fundamental point of view to understand how the accumulation of the damage due to the passage of time can be stopped or suspended. Diapause offers us a way to understand this. Such an understanding may provide clues as to how to slow the ‘aging clock’.”